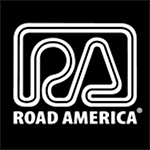 Road America, the legendary 14-turn road circuit racetrack situated on a picturesque 640-acre wooded compound in Plymouth, Wisconsin, has drawn racers and fans alike since 1955. In 2015, they turned to Retailworks, Inc to help them design a new stand-alone 5,000 square foot retail store. Road America is a big deal, so the design had to be a big deal — a place where visitors would say, “Wow! This is awesome!” — A place that would give them lasting memories every time they would look at, wear or use their purchase.

To zero in on the design necessities, we began by conducting a focus group of racing enthusiasts, racers and fans. The final interior design included: a suspended replica of the world renowned racetrack ringed with LEDs and turn numbers, an information center with a wall-sized map of the grounds and interactive kiosk, a custom chandelier made from car parts (including torpedo taillights used on older model cars), textured finishes and custom designed fixtures and transaction counters. Racing design elements from the sport’s flag colors and checkerboard patterns were used throughout, along with dramatic photos from their storied history — even on custom-printed slat wall panels. Space along the perimeter walls was earmarked for a future historical timeline. Since its opening, the store has taken off like a nitro-burnin’ car! 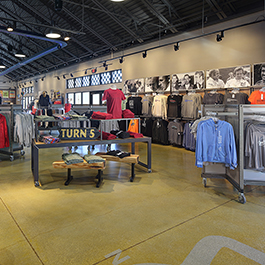 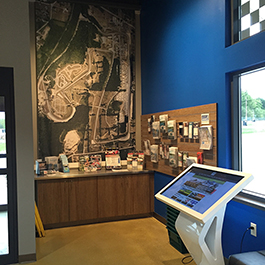 “The ideation process with Retailworks was phenomenal. We shared with them 60 plus years of our history in motorsports and they helped us cultivate ideas that honed in on fan experience. They fine-tuned those ideas and turned a 5,000 sq. ft. rectangle into a bold, high-impact retail environment that has proven itself in both sales and customer loyalty.”

Six years post-opening: “We’re wrapping up a record-breaking retail year – we’ve doubled our 2016 sales (first year of new shop)!!! Big thanks to you and your team for getting us set-up for success.”

Click here for to see our interview with Julie.